Meet Rick McGee, the resident gem cutter at Consolidated Gold Mines. Forty-two years ago his wife bought him a gem cutting setup for his birthday, and he’s been hooked ever since. Rick took a leap of faith and left his stable job as a contractor in Florida and moved to the hill country to cut stones full-time.

I asked him what he liked about cutting stones. “It’s amazing to take a piece of rock and turn it into something beautiful…It’s in there. It’s just a matter of getting it out.”

Like Michelangelo sitting down with his mallet and chisel, Rick readies his implements to carve a heart-shaped gemstone. My comparison to Michelangelo isn’t intended to give the impression that gem cutting is 100% art. There’s also a lot of science and math involved. “You see those tick marks?” He says pointing to one of his instruments. “Each represents 1/50,000,000 of an inch.” Yep. You read it right, 1/50,000,000 on an inch.

“First you start with a rough piece,” Rick says. These rough pieces are nothing special to look at. To me they resemble a cloudy chunk of broken glass. 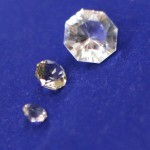 “Then we trim it down with our diamond saw.” The piece is basically trimmed into a workable size. Next the gem is adhered to a “dop stick” with a piece of wax. The stone is then preformed into the basic shape that it’ll resemble in the finished product. Next is the cutting to pattern.

There are numerous different patterns. Most of which you’re probably familiar with, like princess, heart, oval, round, etc. However, Rick has gone so far as to even create his own cuts like Sparkles, Studio, Wheel of Fortune, and Modified studio, to name a few. A true artist indeed!

I certainly wouldn’t have the patience for cutting stones. Some of these cuts require upwards of 50 laser-precise cuts. If you mess up, you have to start over again. I admire and maybe even covet Rick’s dexterity, patience, and artistic ability.

Dahlonega is filled with so many wonderful artisans. Rick is certainly a gem among them. So, if you’re looking for things to do in Dahlonega, stop on by and meet Rick and see some of his handiwork.